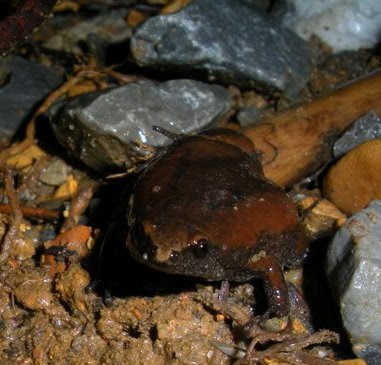 Tuscaloosa, Ala. (Aug. 17, 2010)—Who knew a little bit of plywood and PVC pipe could help unlock the secrets of Alabama’s amphibious underworld?

The University of Alabama recently launched a project that spans seven nature centers across the state and will hopefully help scientists and the public alike develop a better appreciation for the state’s resident amphibians.

Dubbed the Alabama Amphibian Network, the project was made possible through a $2,000 grant the university received last June from Legacy Partners in Environmental Education.

Legacy is an organization dedicated to providing environmental education programs for Alabama residents. Alabama Partners in Amphibian and Reptile Conservation is an acting partner with the network, having provided an online home for the project, aiding in communication between the university, Legacy, and participating nature centers, and hosting data collected from the project.

The project involves installing coverboards (2x4-foot pieces of plywood) and PVC tree frog shelters, both of which mimic amphibians’ natural habitats, at each of the environmental education centers, said Wally Smith, a University of Alabama PhD candidate coordinating the project.

Smith said the nature centers can use the equipment in educational programs to supplement curriculum involving amphibians and forest/wetland ecology.

“The educators get a valuable education tool out of the project that improves science literacy, while we, as scientists, get much-needed information that improves amphibian conservation,” he said. “It's a win-win situation.”

“This project will hopefully help show the general public that amphibians are an important part of the ecosystem and deserve the same protection as other animals,” said Bieser. “By providing the public a chance to see these animals up close and learn what kinds may be living in their backyard, favorite fishing spot, or nature preserve, we hope they will have more interest in helping to protect them.”

So far, Bieser said the coverboards have yielded only a few insects, but as time progresses, he expects that will change.

“We expect to get slimy, zigzag, spotted, and red salamanders as well as spring peepers, gray tree frogs, and green tree frogs,” he said.

The center plans to incorporate the coverboards and PVC shelters into its “Wetland Explorers” program.

Bieser said the program allows children to use dip nets to catch tadpoles, dragonfly larvae, and other aquatic creatures.

“We will incorporate the coverboards and PVC shelters and show the children the adult stages of some of the amphibians in the wetlands and talk about their life cycles,” he said. “These shelters will also likely be used in our weekend and night programs when we take groups out to the wetland for night or frog call hikes.”

Smith said programs such as this one can help people learn to better appreciate a world they are often unaware exists.

“A lack of public awareness about amphibians is a fundamental problem in Alabama when it comes to conserving our wildlife and natural heritage, and amphibians are one group of animals that is taking a big hit within our state's borders,” he said. “The AAN attacks this problem head-on by exposing what we hope will be thousands of Alabamians to the beautiful and fascinating world of frogs and salamanders that lives all around us.”
Posted by Wally Smith at 2:05 PM