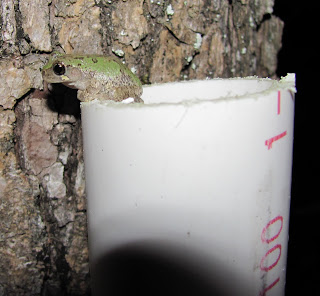 
As of November 2010, over 2,000 students and other members of the public have participated in the Alabama Amphibian Network (AAN) at environmental education centers across Alabama. The AAN is a collaborative citizen science partnership between Alabama Partners in Amphibian and Reptile Conservation, the University of Alabama, and seven environmental education centers across the state. The project has been made possible via funding from Legacy Partners in Environmental Education. The AAN was officially launched this summer.

Amphibians represent one of the planet's most threatened vertebrate groups, with up to one third of all species considered threatened with extinction by international conservation organizations. Another third of all amphibian species lack the basic scientific information necessary for determining their current status. The AAN is seeking to alleviate both of these problems in Alabama by increasing public awareness of amphibians and providing biologists with information on amphibians' distribution, ecology, and status across the state. Alabama is located in a world hotspot of amphibian diversity, making it a perfect location for the project.

Besides the 2,000 people already exposed to amphibians by the project, the AAN has also yielded a potentially new scientific discovery. Participating staff at Camp McDowell have observed unique, undocumented behavior in the Slimy Salamander (Plethodon glutinosus), one of Alabama's most common amphibian residents. This observation is currently being prepared for publication.

Be sure to stay abreast of ongoing developments in the Alabama Amphibian Network by checking out the ALAPARC blog and the AAN website, which will be updated soon.
Posted by Wally Smith at 9:29 AM