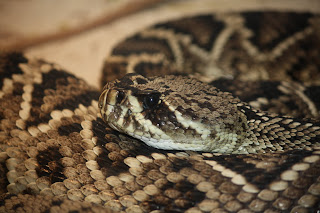 Each year, almost 100 Eastern diamondback rattlesnakes are hunted throughout south Alabama. In the past, many were taken from gopher tortoise burrows. Those captured are placed on display for the rodeo and then killed afterward. Last year, an estimated 20,000 people flocked to Opp for the city’s biggest attraction.

However, citing declines in the Eastern diamondback’s population, some conservation groups believe the “bring ‘em back alive” component of rattlesnake roundups should end, while maintaining other aspects of the festivals. Biologist D. Bruce Means, Executive Director of the Coastal Plains Institute, published a report in 2009 using 50 years worth of data collected from roundups in Opp and three Georgia towns. His findings provide a sobering survey of the impact those events have on the species.

“Both numbers of snakes and weights of the largest snakes that participants turned in annually declined in the last two decades,” he reported. “Statements by roundup officials and rattlesnake hunters support that roundup hunting has depleted local rattlesnake populations and forced hunters to travel further to collect snakes in recent years.”

With Opp’s rodeo less than two months away, some conservation groups have sent letters to city officials urging them to end a recently enacted policy that compensates residents for capturing live snakes for the event. In an interview with the Andalusia Star News, Opp City Planner Don Childre said the city will pay $8 per foot of rattlesnake and $100 for each live unharmed snake over five feet in length. For any snakes measuring more than eight feet (this length exceeds any turned in over the past 50 years), the city will pay $1,000. Opp has paid hunters for years to capture the snakes, but many of those hunters have since quit, according to Childre. He told the newspaper that because of this, “‘we thought we’d open it up to the public.’”

The Gopher Tortoise Council (GTC), a nonprofit organization promoting conservation of gopher tortoises and other unique upland species within the Southeast, One More Generation, a nonprofit in Georgia dedicated to preserving endangered species and the environment, Ruffner Mountain Nature Center and the Alabama chapter of the Sierra Club are among the organizations pushing for the policy’s retraction. In its letter, the GTC stresses the danger in encouraging the general public to capture rattlesnakes, a potentially deadly species.

“Because of this ill-conceived request, untrained individuals inspired by monetary gain are likely to put themselves at great risk capturing, handling, and transporting rattlesnakes,” the letter states. “Although rattlesnakes are unlikely to bite unless provoked (e.g. by capture) a bite from a rattlesnake is potentially debilitating and can even be fatal.” Furthermore, the GTC states that a common practice associated with collecting rattlesnakes involves gassing tortoise burrows, which is against the law in Alabama, but difficult to enforce.

“Gassing burrows can kill or harm the other inhabitants of tortoise burrows (of which there are >360 species including the gopher tortoise, a species federally protected west of the Tombigbee River and state protected to the east),” the GTC letter states. “Tortoise burrows are also known refuges of the eastern indigo snake, a federally listed-threatened species recently reintroduced to Conecuh National Forest.”

The letter also claims that offering a bounty will encourage unregulated exploitation of rattlers. Although the roundups are not as detrimental as the habitat loss and degradation the snake encounters throughout its range, they can still impact the species’ overall numbers, according to David Steen, co-chair of the GTC.

“Concentrated collecting within a particular area is likely to result in considerable decreases in population size and in the most extreme cases, elimination of the species in that spot altogether,” he said. “Between habitat loss, road mortality, and collecting (among other factors), the Eastern Diamondback rattlesnake has to contend with many new threats; this is likely why many biologists think the species is declining overall.”

Steen believes holding an event that celebrates the snake instead of one that includes capturing and killing it will still attract the crowds Opp sees each year. “Festivals of this type are great revenue producing opportunities and can be considered part of Southern culture,” he said. “But, collecting and killing of wild animals doesn’t need to be on the schedule to retain all of that. Educational displays of captive animals will probably satisfy the vast majority of rattlesnake enthusiasts.”

He cited the San Antonio Rattlesnake Festival in San Antonio, Fla. as a prime example of this. The festival, which one newspaper estimated draws more than 30,000 people, offers snake and reptile exhibits, as well as other educational programs concerning the environment. In its letter, the GTC told Opp officials that it would be interested in participating and promoting similar educational activities at future festivals.

For a copy of Means’ study on rattlesnake roundups, visit http://www.herpconbio.org/Volume_4/Issue_2/Means_2009.pdf.
Posted by Wally Smith at 8:41 AM